Kevin Never Wanted A Knicks Jersey Get Over It 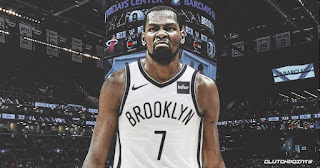 Kevin Durant made a statement that has a lot of Knicks fans panties in a bunch.

Kevin stated that he just wants to play basketball and chill. He is not motivated by any fake cries for a new savior with him in the starring role.

Kevin stated that he has no desire to be the king of New York, that playing with his friends and winning championships is enough for him. You wouldn't think that would be a problem for most people but not so fast.

Talk show hosts on the FAN have spun Kevin's words to say that he doesn't want the "pressure" of playing for the Knicks. What fucking pressure? The team is the most losing franchise in professional sports.

Kevin is saying that he wanted no part of being in James Dolan's circus of failure held at Madison Square Garden. Fact is Knicks fans, no self respecting superstar does either.

It is going to suck for the next three or four years watching parade's going down Flatbush Avenue for the reining NBA champions. I get it, I really do. But lying about Kevin or joking about if he will ever play again, like Boomer Esiason, is not very becoming of you.