Sorry Knicks fans but this just ain't your night 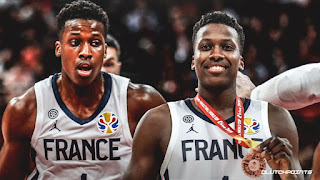 The rumor mill is swirling tonight Knicks fans and it is not looking to good for you guys.

The first rumor directly concerning your team has Frank Nitilinkina demanding a trade and will not return to the Knicks under any circumstances. Frank is currently in France recovering from his injury.

I hope the rumor is true and Frank can go someplace that will allow him to regain his confidence. I would love to see Mike D'antoni get ahold of him. Frank brings his defense in his lunch bag and Mike can help him 'become a confident scorer. That would be a win for both.

The second big rumor of the night is that Zach LaVine wants out of Chicago and both the Knicks and the Brooklyn Nets are eager to make a deal.

I could easily see LaVine agreeing to join the Nets for the playoff run in exchange for Spencer Dinwiddie and Jarrett Allen. Dinwiddie has worn out his welcome and there are not enough minutes for both him, Kyrie and Caris LeVert next season. Allen would only sweeten the deal so much it would be almost impossible for the Bulls to turn down.

The Knicks don't have have anything that Chicago would want and LaVine certainly doesn't want to play for a team that has no chance of competing for a title for decades to come.

Sorry Knicks fans but this just ain't your night. Order a pizza and some beer and at least enjoy something this evening.