Fisher is in over his head

Even with Blake Griffin out due to injury very few thought that the Knicks would win tonight and they did not disappoint. 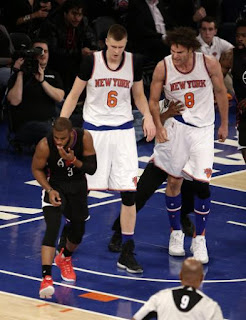 What was disappointing was a lack of effort given by the Knicks.

From the opening tip they didn't play with enough energy to match the Los Angeles Clippers and they couldn't hit a shot to save their lives.

However, that wasn't the worst of it. The major factor in this loss was Derek Fisher. Fisher is in over his head and he still doesn't know what he's doing.

De'Andre Jordan is shooting at a 71% rate from the floor because of only one reason. That reason is his point guard, Chris Paul, and his an amazing ability to beat his defender as he slashes to the basket which usually draws Jordan's defender over to help on Paul leaving Jordan wide open for easy dunks and layups.

You'd think that Derek Fisher would know this and not start the slowest of the four point guards on the team against Paul but you'd be wrong because that is exactly what Derek Fisher did when he started Jose Calderon.

On a good day Jose Calderon has a hard time staying in front of the statue of liberty he wasn't going to have a single chance against Chris Paul and Paul ate him alive and Jordan was adding to his dunk highlights.

Paul was only slowed down a little late in the third quarter when the game was out of hand and Jerian Grant got some run.

Grant's abilty to slash himself forced Paul to expend energy on the defensive end which did seem to slow him down on offense. That and Grant's quickness and being smart enough to play against Paul's dominant hand forcing him to go left more often than he wanted to seem to bring Paul back to earth.