This was a well played game by the Knicks that should have been won if not for Derek Fisher. 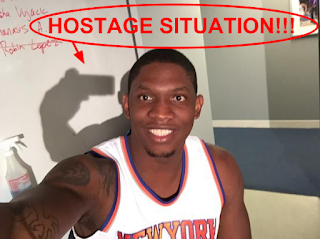 Despite the Knicks being short handed with Carmelo Anthony out due to his sore knee the Knicks actually had a chance to win tonight.

However, they ran into the same opponent which has cost them the majority of their loses this season and that foe is Derek Fisher's coaching ability.

The Knicks built an 11 point lead on OKC with Porzingis on the bench in the fourth quarter because the Thunder had no answer for Kevin Seraphin's size, hustle and muscle.

The Knicks offense was fluid and they crashed the boards.

Finally the Knicks had a team that the Thunder didn't know how to handle because the scoring came from everywhere.

You'd have thought the Derek Fisher would have recognized that lineup as the Thunder killer he had been looking for all game but no.

For some reason Fisher was hell bent on destroying the chemistry and forced Porzingis back into the lineup.

When Porzingis is on the floor and Carmelo Anthony is not playing Arron Afflalo takes it upon himself to be a ball hog no matter how poorly he is shooting he feels that all shots belong to him if Anthony is not around.

I never fault a ball hog I fault a coach who allows the behavior to continue especially after he found a lineup that had an answer for his opponent and the ball hog is inefficient with his shooting.

The game went into over time but we all know damn well what happens in over time with this team.

Either Fisher is coaching merely to teach Porzingis how to lose or he fucking sucks as a basketball coach. If I were a Knicks fan I'd demand Phil Jackson to tell us what the purpose is for keeping Fisher as the head coach. But I'm not. LOL