Are you not entertained?

Well that's it. The Knicks have been eliminated and the season is finally over. 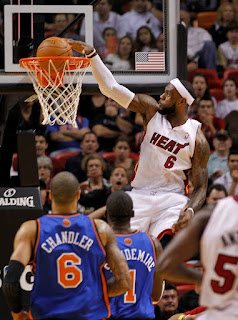 The Knicks fell into the same old tired offense, give the ball to Anthony and hope he can make magic. Now, many Anthony fans will say that he is the only possible option as if he is the only person on the Knicks being paid millions of dollars to play. Well, to those people I have one question regarding the outcome of this season: Are you not entertained?

Lots will be made of all the turmoil and how this team was able to overcome so much and get into the playoffs. Which is complete bullshit but OK, whatever.

Fact is the Knicks as an organization have neither the wherewithal (salary cap) or smarts to put together a team any better than what was seen this season. So this is exactly how future seasons will play out with this assembly of top dollar talent, don't expect more for your own sanity.

As much as I like Jeremy Lin he proved to be a one handed marketing ploy who has a hard time dribbling when the pressure is on but he will sell jerseys and put Asian asses in the seats.

Should Jeremy have come back and "given the team fifteen minutes" like I heard some broadcasters asked? Hell no, especially since he is a free agent and after watching Davis and Shumpert both being carried off the floor due to knee injuries why should he jeopardize his future with no guarantees especially since we all knew the Knicks weren't going any damn where.

Had Lin gone out there tonight and tore his knee up permanently those same people who questioned his honesty about his injury would have said he was never really going to amount to much in the NBA anyway. He did the correct thing for himself. Whether or not it was the right thing all depends upon your perspective.

Now knowing the type of shrinking violet Landry Fields is around Carmelo Anthony I'm sure Jim Dolan wishes he could go back in time and include Landry in the Carmelo trade and maybe kept Felton who the Nuggets never needed and quickly shipped off to Portland after the season.

Landry would be much better suited out west and from the analysts I got to hear around the country this year they still think he is a good player who just doesn't fit the Carmelo Anthony version of the Knicks so he might have some trade value.

Maybe Carmelo Anthony will hit the weight room and not look so weak and puffy while guarding Lebron next season. We shall see.

Who knows what is going to happen to this team but I know this. The Knicks Lose Again, Heat 106 - Knicks 94