Stay your ass over there

So I am getting dressed for work this morning and I hear this guy Gino from the Boomer and
Gino show on WFAN crying like a little bitch because his dreams of Kevin Durant being a Knick were dashed last night when KD popped his achilles tendon. 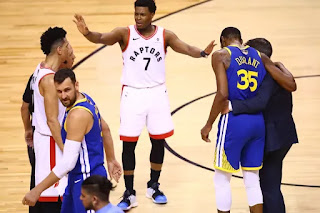 This idiot actually believed that the basketball Gods would show favor on the Knicks and allow a healthy Kevin Durant play for this turd of a franchise.

Even in his current injured state KD is better for because it insures that he will remain a member of Golden State for the remainder of his career. Next season he will receive 31 million dollars to rehab and will also have earned the utmost respect from every fan and member of that team including Draymond Green.

Even in defeat Durant's stature as a Warrior will be cast in bronze because he risked it all for his team. And God forbid the Warriors win the the championship, he'll go down as the 21st century Willis Reed.

Gino went on and on about how he has suffered as a Knicks fan his entire life and dared to call the Nets irrelevant.

The Nets?!? Irrelevant?!? In your dreams loser. If you looked up irrelevant franchise in the dictionary you'd find a picture of Gino spooning James Dolan center court at MSG under blue and orange blanket.

Not only are the Nets the only professional basketball team in this town that has actually made the playoffs recently but it is now the free agent place to be in the Eastern conference.

Your team sucks Knicks fans, if you want to come to Brooklyn you are welcome. Gino, you stay your ass over there with Dolan.