It has been reported on REALGM.com that the Lakers and the Pelicans have agreed on a trade for Anthony Davis. 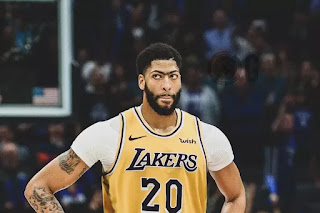 With both Kevin Durant and Klay Thompson out for most if not all of next season the balance of power will almost immediately shift to the Lakers for the power team in the Western confernce in the NBA.

If further rumors of Kemba Walker winding up in LA with LeBron and AD are true the Lakers will seal the deal for supremacy in the entire league. No one will beat them.

The only other free agent the Knicks were publicly interested in was Kyrie Irving who seems to be a lock for signing with the Brooklyn Nets.

Irving is a good player, don't get me wrong but if he does sign then I am afraid that D'Angelo Russell, who is also a free agent will not want to share the spotlight with Kyrie and leave the Nets. A move that I would really hate.

The Nets and Russell took a chance on each other which proved to be fruitful for all. D'Angelo matured and turned into man and an all star here in Brooklyn and the Nets became a playoff team with nothing but promise for the future.

I'd rather have Russell than Irving but I got no say in the moves the Nets make. As a fan I can only hope for the best with whom we have.

It would be a real shame to see D'Angelo Russell leave because I think that he and Kyrie would make the best back court in the game and the Nets would look very much like the Trail Blazers with Dillard and McCollum.

Russell and Irving would be the dynamic duo that Gotham has longed for over many years. They would dual it out each night taking turns being Batman and Robin. It would be a lot of fun seeing them together. Hopefully D'Angelo will see that potential too and stay.

Knicks fans..um I hope RJ Barrett is gone to force the front office to choose Rui Hachimura, the player the Knicks really need. Mark my words, Rui is going to be the next Giannis Atentokounmpo but you are a fans of a dumb and cursed franchise so you'll probably get Barrett.