This is going to be fun 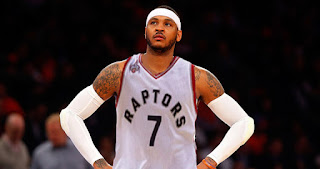 It is being reported that the Oklahoma City Thunder plan to buy out Carmelo Anthony before the end of the summer.

My friends are asking if he will end up with the Lakers.

I can only say I hope so because the Lakers are going to be a three ring circus next season.

With all the crap going on with LeBron and him not even speaking with the coaches before signing, the Ball family and all their foolishness and Magic Johnson's desperation to see the Lakers win to keep his position with the team there is going to be a show every night win or lose.

The Lakers might be more fun following than the damn Knicks next season. Who'd have thought that?

Stephen A. thinks that Melo would be the perfect with the Houston Rockets but that's ridiculous.

If he wouldn't play for D'Antoni when he was with the Knicks and this was his team why would he play for Mike D'Antoni now.

And why in the hell would D'Antoni want him when Carmelo was the reason he was ran out of NYC?

I said it once before and I'll say it again, the best place for Anthony is Toronto but he wouldn't do the smart thing and play for the Raptors. He still needs to be in the spotlight.