Don't say I never gave you anything. 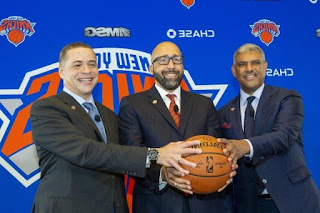 On the cusp of hearing that James Dolan is still so petty that he snatched away the comped season tickets to Ethan Hawke because he dared to criticize the way Dolan was 3rd party running the Knicks I got the news that the Knicks had no luck in the lottery draw and now have the 9th pick in this years NBA draft. Another loss for the franchise.

All this days after we find out the Porzingis is most likely lost for the entire season but not rehabing in the United States. He's off in Lithuania or Latvia or where ever he's from chilling and counting his money.

This means that whomever the Knicks draft it will be his season for development without having to worry about making room for KP and sharing shots and minutes.

The rumors around the city have the Knicks going after a point guard.
I can only assume these rumors are correct just because that is the woirst fucking thing those idiots at Madison Square Garden could do.

Between Frank Ntilinka, Trey Burke, Emmanuel Mudiay and Tim Hardaway Jr. the Knicks are drowning at the guard position. But they seem hell bent on doing something stupid like drafting Trae Young.

Trae Young is nice don't get me wrong. But if you are building a team to compete against Al Horford in Boston, Jonas Valanciunas in Toronto and Joel Embiid in Philadelphia I can't see Trae Young making life difficult for those guys on both ends of the floor.

Porzingis even in perfect health is neither big or strong enough to handle those guys and that is where the Knicks are dominated by their Easter Conference rivals.

I am going to do something that I never thought I'd do again and that's give the Knicks some help to make the team better for the next ten years for free.

In this order these are the Players that the Knicks must draft if available at the 9th pick.

These guys will anchor the middle of the offense and defense for the next 12 years and help the Knicks not only make the payoffs in two years but actually put the team in position to make a serious run at the Eastern Conference title.

Don't say I never gave you anything.


Now if you idiots ignore me and manage to fuck this up then God help you.

Signed, A Yo-Yo with a blog