David Fizdale is the Knicks new coach, let's hope his wife is on the front row 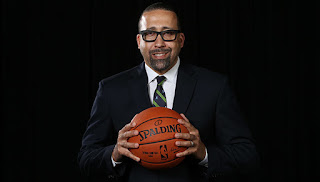 This afternoon as I watched the Cavaliers dismantle the Toronto Raptors I listened to the press conference announcing David Fizdale as the new head coach of the New York Knickerbockers. Whose wife is a dimepiece I must add.

I witnessed Kevin Love, Kyle Karver, JR Smith, LeBron and George Hill carve the young Raptors up like Thanksgiving turkey while in the background hearing Fizdale speaking about opening up the game with the Knicks. Wanting to run more and play good defense.

That's all well and fine but I sincerely hope Fizdale and the Knicks front office don't make the mistake of attempting to build a team to take on Cleveland.

All of the Cavaliers starters are in their mid to late 30's so building a team to play against this model would be fruitless because all these guys will be no longer in the league when the Knicks players hit their prime.

The mission has to be studying the Celtics and Sixers who have big men who can play around the basket and dominate.

Maybe the notion of running a Riley style of offense hoping to run these big guys into the ground with pressing defense sounds good to Dolan but the Celtics, Raptors and Sixers are extremely young. Trying to out condition their opponents sounds cute but that's not going to work these days.

Fizdale is going to have to hypnotize Kristaps Porzingis and program him to believe that he is Larry Bird and get a couple of bruisers to help him dominate the backboard for time of possession and high percentage shots. It's the only formula for success in the East in the short term.

As much as the Raptors feel like shit management is not going to blowup the team and they will be the most athletic and youngest team going into next season. No bullshit I think adding Carmelo Anthony would take Raptors to the next level.

Cleveland didn't beat them by attempting to out run them. Cleveland played slow down offense with the ball constantly moving for open jump shots and guys cutting to the basket for easy layups and dunks. Meanwhile all of Clevelands young players were relegated to the bench to watch and learn.

It was old school basketball that allowed the Cavaliers to sweep Toronto. Having LeBron helped too but it was a clear demonstration of a super star surrounded by smart players making sound basketball decisions every minute of the games.

Let's see if Fizdale can teach that around these parts.
at 1:32 PM