The Knicks made a lot of, shall we say, interesting signings this summer so far to fill out the roster. 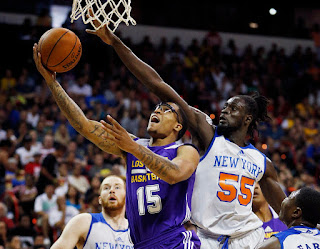 This morning Phil Jackson corrected the error he made last summer by signing Maurice Ndour to a two year contract.

The Knicks sure could have used him last season with Cleanthony and Carmelo missing so many games at the small forward position but it's nice to see the great Phil Jackson is capable of reversing his position on a stupid mistake and making the right correction.

If you didn't see my post from last July click on the link below and check out Maurice's performance in the summer league last July for the Knicks.