With or without Carmelo Anthony

It is no surprise that it is being reported today that Carmelo Anthony has admitted publicly that he is going to opt out at the end of the season. As if I never told you guys this. It makes perfect sense for him to do so because the Knicks can offer him the most money and he can also sign with a team that has the potential to win a championship if  he can negotiate a contract he is comfortable with. 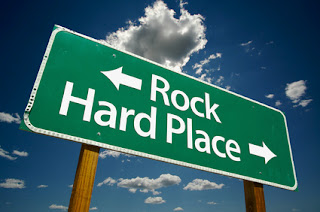 That's all great for Anthony but how does that play out for the Knicks?

Re-signing Carmelo Anthony leaves very little room for the Knicks to sign any type of players that can help the Knicks get past the Bulls, the Nets and the Heat. Remember, the Knicks don't even have a handful of draft picks left after trading for Anthony and Bargnani.

The only chance for the Knicks to be competitive in the near term is either by trading Anthony now for a crap load of draft picks or allowing Anthony to walk after he opts out and using their cap space to go after a Bosh like free agent and several good grade B players that can form a good team.

However, letting Anthony walk would mean that the Knicks gave up half the team and a bunch of draft picks just to rent Anthony for a couple of seasons with nothing to show for it and I don't think James Dolan has the balls to admit that he made such a colossal mistake. He has no choice but to re-sign Anthony.

Knicks fans, if you didn't run your mouths so f'ing much I'd actually feel sorry for you because your team isn't going to sniff a championship for the foreseeable future, with or without Carmelo.
at 10:35 AM