The Knicks started the game fired up, playing good frustrating defense and had very good ball movement on offense which had them leading by as much as 16 points. 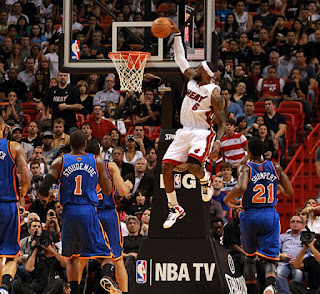 But, if you have followed this team this season you knew it wasn't going to last.

This team's rather low situational basketball intelligence and the need to showboat would be its demise and that's exactly what transpired.

The Knicks allowed Lebron James to cut to the basket for easy layups and dunks time after time.

J.R. Smith's telegraphed passes and ball handling laziness lead to turnovers which resulted in easy points coupled with coach Woodson's bone headed decision to keep Amare Stoudemire on the bench for much of the fourth quarter sealed the deal for today's loss against the Miami Heat.

The Heat were ready to concede the loss and focus on tomorrow's game against the Timberwolves but with all the sloppy ball handling and reckless defense from the start of the second half the Heat gladly accepted the gift the Knicks handed them.