Woodson is a poor coach

JR Smith played a helluva game last night. His energy on both ends of the floor was amazing by anyone's standards. 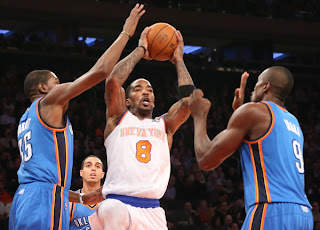 JR cannot be faulted for the loss last night because he didn't make the last shot. Cries that he is not clutch this morning is a bunch of bullshit however he was the well that the Knicks went to way to much.

The fault for last night's loss lies on the shoulders of coach Woodson for asking too much of JR Smith and running a predictable play that left the ball in JR's hands.

There was no point of Novack being on the floor if there was no play calling for JR or Raymond to penetrate the lane and then kick the ball out. I would love to see JR ask Clyde to point out two things from each game that he could improve upon and how. Clyde is a resource that could really help JR up his basketball IQ and turn him into a real star.

Tyson Chandler should have been left in the game if Woodson wanted JR to take a jump shot for two reasons. The first being the high pick and roll which would have made some space for JR for a better look against Westbrook and second so that Tyson could crash the boards in the event of a missed shot.

The most troubling thing about last nights game was not the loss. It is the confirmation the coach Woodson is a poor last minute situational coach. He's has no creativity or imagination and makes poor substitutions when the heat is on in the final few seconds.

JR played his ass off last night, too bad Woodson didn't coach his ass off or the Knicks might have pulled this one out.

By the way what the hell is up with not playing Copeland?