This has to stop immediately

Every minute that Toney Douglas is on the floor the opposing team is playing with six players. He has no business being paid to play professional basketball. 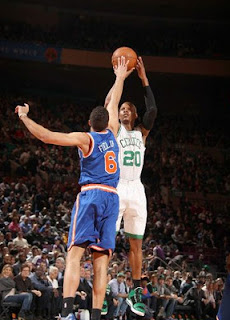 I can't understand why Jeremy Lin did not play in the second half when he was the only Knick guard penetrating, passing and not tossing up unwarranted shots.

This one is on Mike D'Amphoni. When he is shown the door he needs to take Toney Douglas with him.

I find it very hard to believe that the Knicks cannot find a serviceable point guard in Europe or the D League. This has to stop and immediate moves must be made. This team cannot continue to hang its hopes on some version of Baron Davis that decides to play when he is cleared to play.

Ray Allen's late threes wouldn't have meant anything if the Knicks had a setup man at the point at the start of the second half. The game would have been over by the end of the third quarter.