Are we going to start this fucking shit all over again?

November 27, 2011 It was a cool and bright Sunday morning and I had just finished my coffee and bacon, egg and cheese on a toasted roll sandwich. I saw a couple of cute hookers when I went to the veggie stand and all was right with the world.

Well, all was right with the world until the sports talk on the radio shifted from the particulars of the NBA agreement reached yesterday to Knicks talk and my rage began. 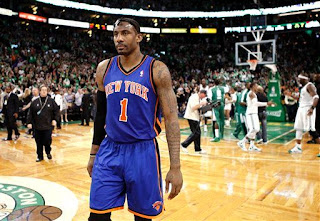 Now, I know I said last season that I'd never write another post for this blog again and I was really hoping to keep my word but these fuckers on the radio have pissed me off again and I need to say a quick word or two which is a better alternative to going outside and shooting cats with my BB gun.

It wasn't the idiotic Mike D'Antoni talk that set me off today. I think the hiring of Mike Woodson is Jim Dolan's way of putting Mikey on notice about what will happen if the team starts off poorly and I am good with that. Defensive coach, lol, yeah right.

Nor was it the foolish 'Chauncey Billups will lead us to the promised land' claptrap from callers. If the Knicks don't pull off a deal to move that 14 million dollar contract of Billup's for Marc Gasol they are officially a bunch of retards.

The fucks on the radio are still wondering if there is another free agent center out there that would be a better fit than Amare Stoudemire. Umm, dick wads, Amare is not a center and he broke down physically last year because he is constantly playing out of position. Are we going to start this fucking shit all over again this abbreviated season? Really?

If the Knicks don't address the point guard and center position look for them to repeat the one and done playoff appearance of last season and will repeat every season going forward.

Are these fans and "analysts" ever going to get it?

Let's hope that Landry Fields put up at least 50 thousand 18 foot jump shots during the off season so that someone can take advantage of the mid range opportunities that will present themselves when Amare and Carmelo are on the court at the same time. We shall see.

Now if you'll excuse me I'm going to fire up my new Hector Lavoe playlist and practice my new Salsa steps.