Mr. Anthony, are you that selfish?

You know, I have purposely refrained from commenting on the past two losses for the Knicks because I don't want to come off as just a complainer.

However, it has been difficult to do while I watch the Denver Nuggets box-scores to only to see Raymond Felton and Wilson Chandler doing so well. 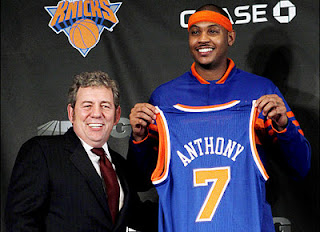 And watching the evening news and witnessing Deron Williams, who I have stated in past posts would have been a better fit for the Knicks, take the hapless Nets on a five game winning streak and improving the players around him isn't helping either.

It is obvious that if the Knicks are going to give up on the D'Antoni system then he has to go because he knows no other way of coaching. But no matter the coach one thing must happen beginning today, Carmelo Anthony has to stop being a selfish baby.

Mr. Anthony, you got your extension and all the money you asked for, there is no reason to continue to play as if you don't have a fucking working synapses in your brain. Refusing to buy into moving the ball on offense and moving your ass on defense makes you look like a selfish idiot of the highest magnitude.

Why can't you just defer to the system that the majority of your new teammates know and buy in to being a team player? Why does it have to be all about you?

I can't say you have a case of Al Harrington's Disease because that disease forces a player to attempt to do too much to prove his worth on the team. Your problem is different.

You have your contract, you have your money and you are playing "at home", which I always thought that was some bogus BS from your camp but whatever, you have everything you wanted. Why can't you give this team and fans some of what it wants which is team basketball within the confines of D'Antoni's passing philosophy and effort on defense?