Was it any surprise that the Knicks lost tonight? Nope, most rationally thinking folks knew they were going to lose and I am personally hoping they lose every single game for the remainder of the season. 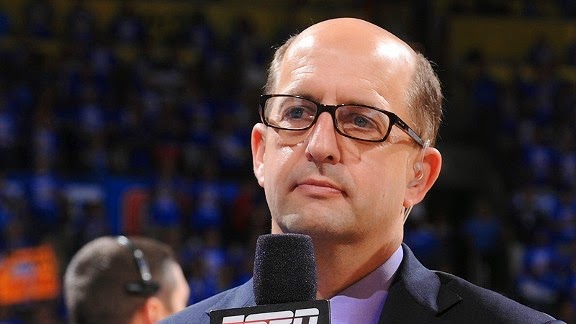 A total meltdown and not making the playoffs will make for our only chance of getting Mike Damphoni's walking papers handed to him.

The problem I had with bullshit during this game came not from the team but the announcers.

First, I must apologize to Charles Barkley for calling him the dumbest commentator on the NBA. I was wrong. That title belongs to Jeff Van Gundy. What a fucking idiot.

Of course Van Gundy spent most of the night slurping Anthony and making the usual excuses for him.

Of course Van Gundy took cheap shots at the players who were traded. All the punk has are cheap shots. But the crap that fell out of his mouth the irked me the most was the claptrap about Knicks fans wrongly thinking that the team before the trade was going to compete for a championship.

Really Jeff? Who the fuck told you that? I certainly didn't.

Let me explain exactly what many Knicks fans like myself really thought about the team that began the season since you don't have a got-damn clue.

Most fans had zero expectations of the Knicks competing with the likes of Boston, Orlando or Miami. You think we didn't have the ability to read the fucking roster and see that there wasn't an experienced and legit center on this team as well as very little depth?

This team hadn't made the playoffs in nearly a decade nor had it won a championship in damn near forty years. How the fuck was anyone going to think that they were going to compete for a championship this season you douche-bag?

All most fans wanted was hard and competitive play every night.

We wanted to see our young players develop into a cohesive unit that entertained us each game they played.

Bottom line is this Jeff we watch games on television for the same reason we watch the Amazing Race, to be entertained.

Working hard, playing smart, being scrappy and beating the lesser teams while making it to the playoffs were all the Knicks fans asked for this year in the way of an entertaining season. Which in my humble opinion wasn't too much to ask.

Now that I have explained our expectations before the trade for Anthony you punk let me explain our anger after the trade.

We received a point guard who every "expert" with a column and fool behind a microphone said was a major upgrade over Felton. Gallinari and Chandler combined couldn't carry Marshmellow's jockstrap in most "experts" opinions.

Yet this veteran point guard and two all world forwards have lost to sub .500 teams and are now themselves below .500 and all you can muster in the way of an excuse is a lack of practice. Practice? Practice ?!? We talkin' bout practice?!?

We are angry because unlike you professional clowns the fans know that this isn't fantasy basketball. A star for the sake of having him doesn't make a team let alone a better team.

We are angry because a group of young over achievers were able to play with more smarts, passion and selflessness than the 165 million dollars worth of super stardom we currently have and now we are below .500.