The players are selfish and the coach is clueless

The most interesting thing regarding last night's loss to the Houston Rockets, 118-99, was the fact that both the coach and the "stars" on this team completely ignore Kristaps Porzingis. KP is their only hope of winning every game and I fear its going to take the Knicks to be mathematically eliminated before they learn this lesson. 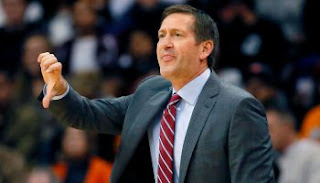 The duo of Anthony and Rose continue to hog the ball and not play within the offense making sure that KP gets touches in his range while at the same time continuing to develop him for the future.

Anthony and Rose feel as if this is their team and Rose his opportunity to get one more max contract. He doesn't give a damn about playing team basketball.

You'd have thought that layup after dunk by the Rockets that Coach Hornacek would have put the teams best rim protector on the court for the entire 4th quarter. But no, KP sat on the bench until for all intents and purposes the game was over with 3 minutes remaining.

Noah's best and most athletic years are a distant memory. Your best hope at center on defense is KP and Noah needs to be assigned to the apposing team's power forward. Fact is Jackson should never have allowed Brook Lopez to leave this team.

Phil Jackson's presence is not always welcomed by the players and some of the media in this town but I'd like to see Phil have one more meeting with the entire team. In that meeting I want Phil to look directly at Melo and Rose and state "This team ain't about you or you. He (KP) is the future and you better start playing like it."

Unfortunately Knicks fans this will never happen in a million years. You are going to see KP not develop enough on either end of the floor because the players are selfish and the coach is clueless.

If you want to watch a New York team hustle on offense and defense and fight until the last second the show is in Brooklyn. The Nets are the most entertaining team in New York City right now even win they lose.