It is time for this guy to go 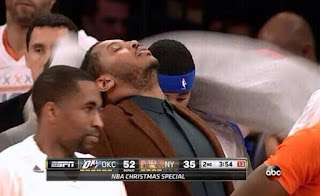 The major story of the day was not about the Knicks loss to the Celtics by one point. The Knicks lose all the time that's not news.

The real story is major sports commentators publicly announcing that it is indeed time for Carmelo Anthony to go, most notable was former NBA all star Jalen Rose.

"If I'm James Dolan I don't want him (Carmel Anthony) on my team anymore" Rose said on his show Jalen & Jacoby last week.

To me Anthony waited until the Knicks gave him his last max contract before he began to show his ass hoping to force a trade out of here.

If I am Dolan I'll trade him alright. I'll send him to the Milwaukee Bucks or the Charlotte Hornets. He wouldn't suck every nickel out of me and leave my team depleted of future assets and get rewarded to by landing a team on the cusp of winning a title.

Those of you who have been reading this blog know that I never wanted the guy here in the first place for all they had to give up to acquire him.

All the so called experts on the sports radio shows and sports writers in this town got into the ear of James Dolan before the trade and made him think that the deal at the time was a no brainer. That giving up all those solid pieces, not stars, but solid young pieces and future draft picks would not match the magic that Carmel Anthony would bring to this team.

Well all those assholes in the media, both the radio and print, were fucking wrong. They are as much responsible for this mess of a franchise as James Dolan is.

These so called sports experts all talked about the possibility of building around Anthony but they never explained how and with what they were going to build around Anthony and those cocksuckers still haven't.

Finally a voice much more respected than mine has said that it is time for this guy to go and hopefully the team can acquire some of the picks lost in the initial trade so Phil Jackson can build this thing correctly this time.
at 2:36 AM